The following article will guide you through deploying your billing frequencies using sticky.io Subscriptions for BigCommerce!

Written by Zakk Sykes
Updated over a week ago

Launching continuity has never been easier thanks to sticky.io Subscriptions for BigCommerce plug-and-play billing frequencies feature.

In this article, you and I will take a deep dive into understanding what billing frequencies are and how to create them. In Step 2, we will discover how to append them to your products.

In a hurry? Watch our Onboarding & Training Specialist guide you through every possible combination of billing frequency that can be created in just 3:58. Inversely, review our step-by-step article below.

To begin, from your storefront navigate over to Apps > My Apps > sticky.io > Billing Frequencies. 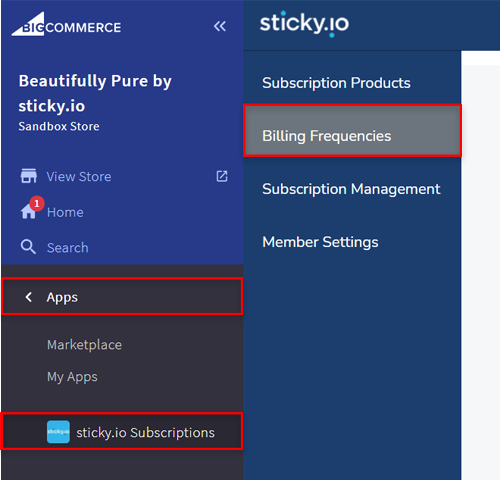 As with every new billing model, the name! It's generally recommended that you name the billing model whatever the intended purpose for it is. For example, if you'd like to bill your consumers on a monthly cadence, we would title this '30 Day Billing Model'.

It is important to note that you can reuse the same billing model across your products. Additionally, the billing model is seen by your consumers. So try to make it memorable and clear.

Congratulations, you're officially an expert on creating billing models using the sticky.io Subscriptions for BigCommerce app!

Did this answer your question?